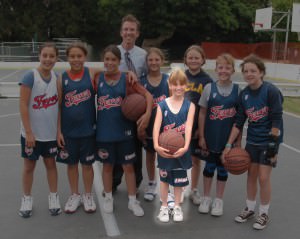 We’ve got three sons and a daughter. They arrived in that order. By the time our daughter Emily was born, I had coached and/or refereed multiple seasons of Little League, Muni Basketball, and AYSO.   When our daughter arrived she showed great promise as a tenacious, though tiny, basketball player. Then things changed.

Suddenly, she was more interested in ballet than ball. She liked the outfit (always important), her friends were doing it (also important), and, generally, it didn’t involve boys (very important at age seven). Although I wanted to take her to her classes, they happened mid week after school – so I was out. Ballet became a ritual for mother and daughter and, as usual, I became the videographer.

Our local coffee shop is in the same mall as a small dance studio. Last Saturday morning after I went to the gym, I swung by the mall to pick up a coffee for my wife. Walking out, I was amazed to be facing three middle linebackers, each carrying a small, pink backpack, and holding the hand of a tutu-clad mini-ballerina. The group was apparently headed to some kick-ass Saturday morning dance class. The daughters were skipping with their burly dads in tow. It was probably the cutest thing I saw all day.

Despite rumors to the contrary, men are actually capable of talking about things that matter – once they get sports and hot moms out of the way. There is, to some extent, an immediate bond between men who take their daughters to ballet. They are men who will venture with pride into the world of women, as beginning ballet continues to be, men who have learned to confront a tight hair bun or a blistered foot with confidence and love.

Men who know what it means to sign your dancer in, and out. 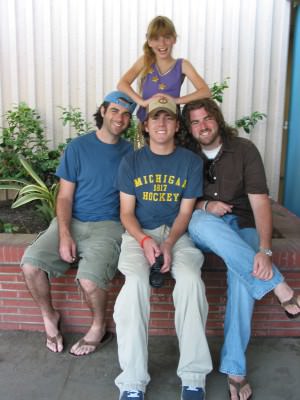 Saturday I envied the Ballet Dads with their little pink partners headed toward a room ruled by strict manners, classical music, and constant counting. I knew that despite everyone’s best efforts some edges would fray as personalities rose up, and the leaping got out of hand, and the relevés left the rails. I wondered how these dads would talk to their daughters about the “mean girl,” or the really strict teacher, or whatever would come pouring forth as they got in the car. I knew that those dads would be prepared, because mean girls, bullies, and tough coaches exist in everyone’s world – boy or girl, mom or dad.

This is the stuff that parenting is made of. Showing up. Being there. It’s about being a Ballet Dad and putting your whole heart into it. Teaching your child how to cope with hurt feelings, how to redirect frustration, and how to avoid being diminished by the behavior of others.

It doesn’t matter if you’re the Dad or the Mom, on a dance floor or on a ball field, the things children need to be taught are all the same: kindness, respect, generosity, and fair play.

This weekend we get to watch the Super Bowl. Let’s raise a glass to the all those Dads whose daughters will fall asleep in their laps during the game.

How Sports Teach Us

That's Not How We Do It in Our Family