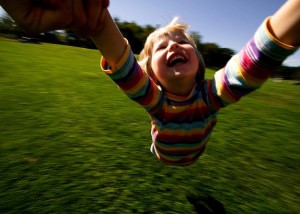 Ever since my time in the closet ended my terror of the dark, I’ve used the same method to address other fears.  I’m what psychologists call a “counter-phobe.” When I was afraid of needles, I gave blood.  When I worried about not knowing anyone at a party, I forced myself to go. It worked!

I’ve encouraged my children to confront their anxieties in the same way.  Problem-solving builds self-esteem, and real growth often occurs during our least comfortable periods.

But I’m also aware that not all fears can be addressed like this.  Some things can’t be confronted head-on.  Those are the things that parents sometimes tend to stress about that aren’t really within our immediate control, which is a tendency we should try to resist.  Bovine growth hormone, the chemical content of fabric softener – yes, perhaps these are genuine long-term concerns, but they’re not worth ruining “today” for our children.  Kids already have many worries that don’t even hit our radar: “Is Johnny going to be mean to me?” Will I be picked for a dance solo?” “Does my teacher like me?” Adding to their anxiety by being anxious ourselves is a big mistake.

In the late 1940s, Dr. Theodore Woodward, a professor at the University of Maryland Medical School, told his students “When you hear hoof beats, think of horses, not zebras.”  Since horses are common in Maryland and zebras are rare, one should expect that hoof beats are probably made by a horse.  This expression was accepted in medical circles to mean that the most simple explanation is probably the most likely – and one shouldn’t necessarily look (or think) beyond the obvious problem for some bigger problem.  The same goes for things we choose to worry about.  Or not worry about.  Keep your worrying simple – the anxiety spread by being overly concerned about the radiation from a cell phone is probably worse than the effects of the radiation itself.

Don’t worry, be proactive THE ULTRASOUND – The First Excerpt
Scroll to top