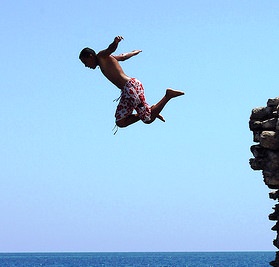 For me, helping my children develop a sense of themselves has meant giving them personal “grips” onto which they can hold when the winds of social conformity start blowing their way.  Our first encounter arrived in the form of an earring.

When Aaron was in the 6th grade, one of his friends, the child of good friends of ours, came to school with an earring.  Since JoAnn and I were friends with his pal’s parents, Aaron was sure he could convince us to let him pierce his ear and start sporting a stud.

He was wrong.  In fact, our conversation led to the following position statement (from me):  “Until you are eighteen years old and, as long as you are living in my home, I own your body.  You may not deface it.”

Aaron agreed, and he surrendered to the fact that his father was really strict and that he was going to have to return to school unadorned, which he did the next day.

Believe it or not, he survived.  He returned to school and his friends still spoke to him.

Here was my thinking. First, I gave him an out, not an absolute “no.”  He could make the decision for himself when he was eighteen.  Second, I wanted to show him (by forcing the issue) that he could return to his peers without an earring and still remain popular.  Finally, my theory was that he would ultimately distinguish himself by being a guy who didn’t have an earring.  Ironically, six years later he pierced his ear two weeks before his eighteenth birthday.  He expressed concern to JoAnn that I would be angry, but, at that point, I considered his decision “age appropriate” and I met him with humor.

Jewelry notwithstanding, Aaron has a strong sense of himself.  He survived all those years without an earring and I think the process gave him a perspective about trends.  On the other hand, it’s completely understandable when children want to do what everyone else is doing.  On one occasion, we were attending a formal party that our children were also attending.  I couldn’t help but notice that the children, specifically the boys, were getting pretty rowdy and their misbehavior was beginning to creep into the consciousness of the adults.

As I watched them, I remembered my feelings as a child (when it was all about having fun) and tried to blend them with my reaction as a parent (cringing at the thought that someone might say “Those kids were really wild last night — especially that Greenberg boy!”).

I decided to flag down my son, Ben, and drop this on him:

“It’s OK to be an idiot – just don’t be the biggest idiot.”  I think he really appreciated that.  Recently, Aaron phoned to tell me that he was afraid he had been the “biggest idiot” at a holiday party.  He’s a grown man now, so it isn’t my problem – but it’s funny (and gratifying) how the old admonitions can stick.