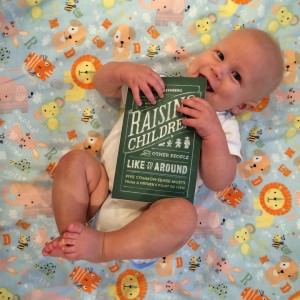 Even though I’ve written a book about parenting, the process of building a happy family continues to evolve, and after raising four children over a period of thirty-six years, there are a few things that stand out as lessons learned.  Here are three new observations that have recently bubbled up.   I consider these to be simple tips for helping parents unify their families and raise happy children.

When our sons were young, perhaps nine and twelve, they were playing with our neighbor who had a go-kart. Both boys were salivating at the prospect of driving it. At that time, the neighbor made a point of telling Aaron he could drive the cart, but Benjamin (our second son) couldn’t. Benjamin came home (across the street) to tell me about it. 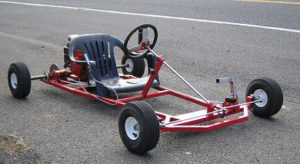 It was more the neighbor’s tone than not being able to drive that was upsetting Ben, so I called Aaron over for a chat. “Our neighbor is being really mean to Ben.” I said. “Being brothers is a package deal and I don’t think it’s right for you to ignore that behavior, even though you want to drive the go-kart. If our neighbor is going to be mean to your brother, then you can’t let him get away with it.”

At the time, I was holding my breath. I thought – gee, only an idealist would expect his kid to step up to this – but Aaron followed instructions and abandoned the mean neighbor kid.  The boys came into the house and busied themselves with something else. I completely forgot about it until twenty years later, at his bachelor party, Ben explained that he knew what being brothers truly meant the day that Aaron chose not to drive the go-kart.

The house I grew up in had pictures like this on the walls. 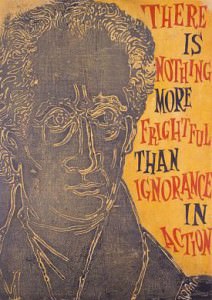 We had a small area in the living room with some pictures of our cousins, and my parents had various pictures of themselves and loved ones (including my sister and me) in their bedroom… but that was pretty much it.  I always got the impression that my mom felt that putting pictures of ourselves around the house was narcissistic. 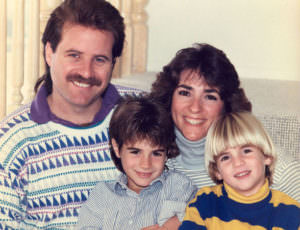 Once JoAnn and I started building our family, she began decorating our home with photos.  As our family grew, so did the collection. For a period of at least ten years, we took a family portrait every Thanksgiving so that we could send it out as a holiday card. 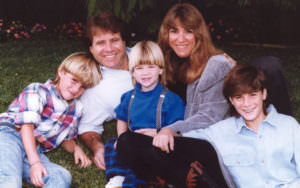 At the same time, we took individual pictures of our kids and those were used to decorate the immense set of shelves in our family room. It was (and remains) essentially an altar to our family and loved ones. 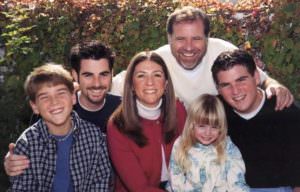 At first I thought having all of those pictures of us and our kids on display was egotistical (after all, I am my mother’s son). When I think back on it today, and I imagine that family room full of laughing children, I can see how our senses of unity and love were reinforced by the images around us.  So, these are the pictures our children grew up with. 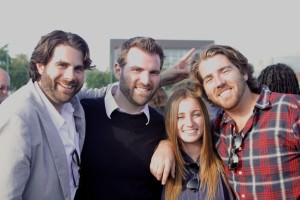 As a result, I encourage you to do everything you can to unite your children. Promote group activities. Take family pictures and put them where everyone can see them. Show your kids and the world that you are proud of your family – and they will be proud of it too.

We have a grandson now, so I’m far more attuned to people with strollers. What I notice is that many parents are talking on their cell phones while pushing their toddlers through town. Whether or not the child needs attention, it’s probably clear to them that they’re not number one on their parent’s agenda.

There was a time when we made fun of this phone addiction with a family photo. 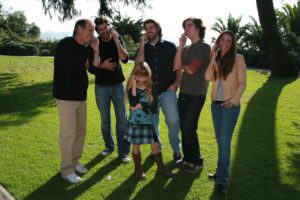 I know it’s hard to put the phone down, especially when it seems as though the baby is being entertained by all the things you’re walking by, but the fact is that children are aware of everything we do, and parents who are paying attention elsewhere are denying themselves and their children excellent opportunities for intimacy.

The same goes for the dinner table.  Try asking everyone to put their phone somewhere out of reach at dinner time. It’s hard, but it’s only thirty to forty-five minutes… set a timer if you have to, but without our phones, we actually look at each other and have conversations.  Now my kids yell at me when I get a text during dinner. 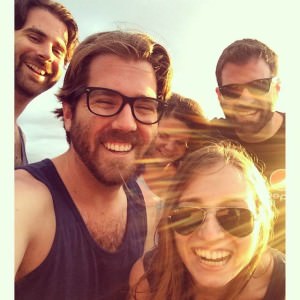 None of these things is particularly easy….well, maybe the photos thing is… but what they all require is an understanding that, as parents, our job is to show our children what family life should be, even if we’re cynical or tired or not in the mood.   We have the power to build our families from scratch. My family is different from the one I grew up in, and so is yours. Make that a difference that you’re proud of.

I find, and have found, refuge in this optimism, and I believe you can too.