Here’s an excerpt from the introduction of my book, “Raising Children That Other People Like to be Around.”

The ultrasound!  We had been waiting three months for this day. We took our three sons with us, as this was going to be big news.  JoAnn and I had already been blessed with the three boys, Aaron (15), Benjamin (12), and Coby (7), but this time we were hoping for a girl.  Aaron had been born when we were twenty-six.  I wouldn’t ever say that he was an accident, but we weren’t originally planning on having a child just two years into our marriage.  Once started, we thought it made sense to bring along our second child, Benjamin, around the three-year mark, and then, as part of our desire to regroup, and to give Benjamin a chance to establish a decent foothold on his life, we waited another five years before welcoming Coby Michael.  That was it.  We were done.  No girl.

As the next few years passed and our boys continued to grow, I watched JoAnn jump at the chance to buy gifts for our nieces and the daughters of our friends.  After all, JoAnn is the “girliest” girl I know – always well put together, never harsh or rude, patient and loving at all times.   I felt that the three sons were largely mine to train, but I knew she needed someone into whom she could pour her years of wisdom and womanhood.  So one day I said to her, “I think we should go for the girl.”  She said, “You’re crazy, after three boys, the odds are really against us.”  I said, “Let’s cheat a little,”, and that began a seven-month journey to and from the office of a fertility specialist who was trying to help us “get the girl”.  At first it was really exciting, but after seven separate months of high hopes and regular disappointment I said to her, “I think happy eggs are fertile eggs, so let’s blow off the medical hoo-ha and just see what happens.”

Of course, we stacked the deck again.  JoAnn bought the Ovu Quick Kit and tracked all the necessary happenings.  One day, while I was in a meeting with our biggest client, I got a message from my wife saying, “COME HOME NOW!!”  The meeting had started at 11 a.m. and it had taken months to set up – I couldn’t leave just then – this was MY presentation.  When the meeting finished, at one o’clock, I sped home ready to make a baby.  Afterward, I carried great apprehension about those two hours. If we had another boy, would I get the blame because of the two hour delay? 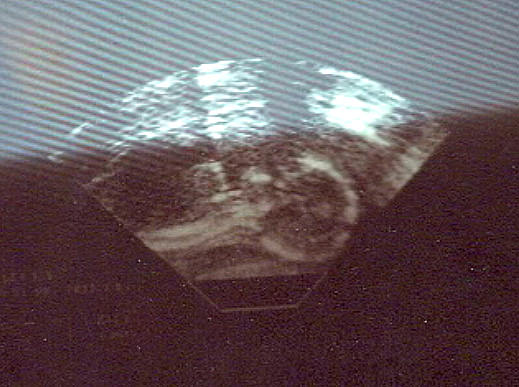 So, here we were at the obstetrician’s office, sonogram underway.  JoAnn was forty-two, so she’d had an amnio four weeks earlier – but this was the follow up, and this was going to be our moment of destiny.  We all crowded into the room as the doctor placed gel on JoAnn’s belly, and I explained the different machines to our boys, who had never seen an ultrasound.  The doctor said, “Well, this baby has fine shoulders, and the brain appears to be developing quite nicely.”  To which I responded, “You know doctor, we’re here to determine the sex of the baby.”  Her reply was quick and direct.  “Yes, but this is my job, and I have to do it in a specific order.  I will let you know when we get to the pertinent parts.”  “Okay,” I said sheepishly, and we boys went back to joking (mostly making fun of me for being pushy with the doctor.)  After a few minutes, the doctor said, “Would you look at that?”  We all turned to look at the screen, on which “It’s a Girl” had been typed.  We erupted in tears and relief, except JoAnn, who skeptically demanded to see the genetic outcome of the amnio in order to confirm what the doctor had told us.  Sure enough, it WAS a girl.

Minutes later, we walked down the hall in a happy cluster surrounding JoAnn when suddenly she stopped short, made a face, looked at us all and said, “Did you guys hear that?”  None of us had heard anything.  “You didn’t hear a loud boom?”  “No,” we all replied.  “Oh,” she said, appearing to think deeply.  “I’m surprised you didn’t hear it.” “It was all of you dropping a notch in status.”  That was the prologue to the arrival of our fourth and final child, our wonderful daughter, Emily.